The field of neuroergonomics studies the relationship between human behavior and the brain at work [1]. It provides a multidisciplinary translational approach that merges neuroscience, cognitive psychology, human factors, and ergonomics to study brain structure and functions in everyday environments. For example, applied to the scenario of driving a car, a “neuroergonomic approach” allows us to investigate the relationship between human mental behavior, performance, and road safety, providing a deeper understanding of human cognition and its role in decision making [2]. Driver’s mental workload (MWL) plays a crucial role in driving performance. Due to excessive MWL, drivers undergo a complex state of fatigue which causes a lack of alertness and reduces performance [3].

Consequently, drivers are prone to committing more mistakes due to increased MWL. It has been revealed that human error is the prime cause of around 72% of road accidents per year in Europe [4]. So, increased MWL of drivers during driving can produce errors leading to fatal accidents. Driving is a complex and dynamic activity involving secondary tasks, i.e., simultaneous cognitive, visual, and spatial tasks. Diverse secondary tasks, natural driving, and different road environments increase the MWL of drivers, leading to errors in traffic situations [5]. The alarming number of traffic accidents due to increased MWL leverages the need to determine drivers’ MWL efficiently. 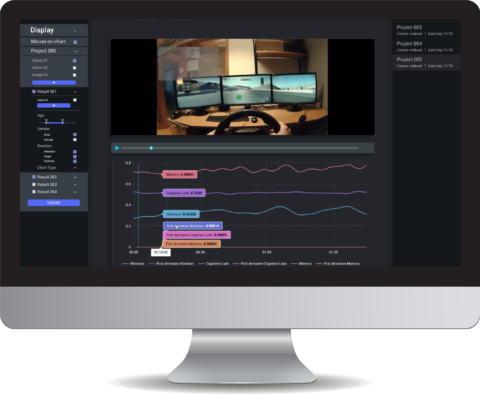 To address this issue and ensure a proper level of user mental workload during their operating activities, and thus a higher level of safety, automated systems have been widely investigated and developed to support the user during high demand activities in complex environments, such as aviation and car driving [6]. When automatic control completely replaces operator actions, at the same time, the user is still required to monitor that the automated tasks are carried out effectively by the system, as automation is not necessarily able to mitigate all problematic situations, and paradoxically that automation can sometimes even make such cases more difficult for the human operator. In order to balance the operation of the driver and automation system, which is called adaptive automation (AA), measuring MWL could be helpful. It has been demonstrated that AA can ensure the operator’s workload remains within the optimum range, preserve their skill level, guarantee continuous task involvement and vigilance, and thus increase their performance [7,8]. In this context, neurophysiological measures, in particular electroencephalography (EEG), have been demonstrated to be one of the best techniques to infer in real-time an objective assessment of the mental workload experienced by the user. Since it is one of the most costless and achievable methods, recent progress in passive brain-computer interface (pBCI) technology also led researchers to consider EEG as the perfect candidate to trigger AA-based systems [8,9,10]. It is used to distinguish the driver’s MWL level. This phenomenon can be classified into different levels, which will alert the system to set the automation at an appropriate level. This approach can be used in the car industry to lessen drivers’ mistakes while MWL is increased. The main result of this system could be preventing potential car accidents.  [11]

All in all, monitoring drivers’ performance is a critical approach that should be considered while using autonomous or semi-autonomous driving. Although, according to the Society of Automotive Engineers (SAE), reaching level 5 autonomy will not be possible soon, the earliest around 2050, we need to go through different steps toward full autonomous mobility where we gradually remove the role of driver/operator. So, to ensure enough level of safety, a proper Human Monitoring System (HMS) is required to consider and compensate the drivers’/operators’ roles during operation. One method that outweighs full autonomous driving is to combine drivers’ MWL and automation systems. According to this phenomenon, one of the most effective ways is processing EEG, which gives information about the driver’s alertness level. Using this method, the rate of drivers’ mistakes will decrease, which is one of the essential purposes toward safe and sustainable mobility.

Sign up to our newsletter to keep up to date with our improvements and achievements as well as interesting blog posts within BCI and Med Tech.